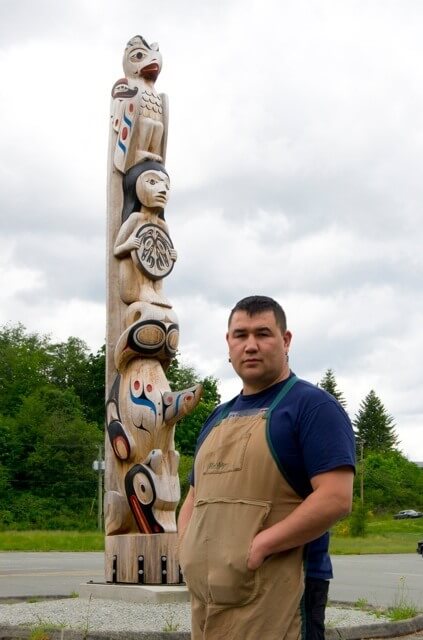 Details: Imagery of a seawolf at base, woman holding drum, and thunderbird. Drum design by the artist Art Thompson. Lead artist Gordon Dick with Erich Glendale.

This pole was commissioned by the Tseshaht First Nation and raised in April 2010 where the old Alberni Residential School used to stand. First Nations children from all over the province were forced to attend residential schools and were subjected to atrocities. My own grandparents and uncle attended the Alberni Residential School, and I still remember watching it being torn down. The Aboriginal Healing Foundation was mandated to help its survivors heal from the traumas they endured. I am only able to carve today because of these survivors, who held on to their culture despite being forbidden to practice their traditions. This pole was carved to help turn the page and rebuild First Nations culture.

The 23-foot totem pole weighs 6200 pounds and took 55 days to carve. The figure at the top is a Thunderbird, which is often placed at the top of poles because it is a powerful bird from the spirit world and helps maintain balance. The middle section is the first female ancestor, to honour women: she is said to have witnessed the Thunderbird transform into a man. She holds a drum with an Art Thompson design of a male and female wolf. Art Thompson was a respected Nuu-chah-nulth artist and a survivor of the Alberni Residential School. The inclusion of his design is a tribute to his courage in speaking out about the abuses he endured. The bottom figure is a Sea Wolf, which is a killer whale transforming into a wolf: it symbolizes family and protection.