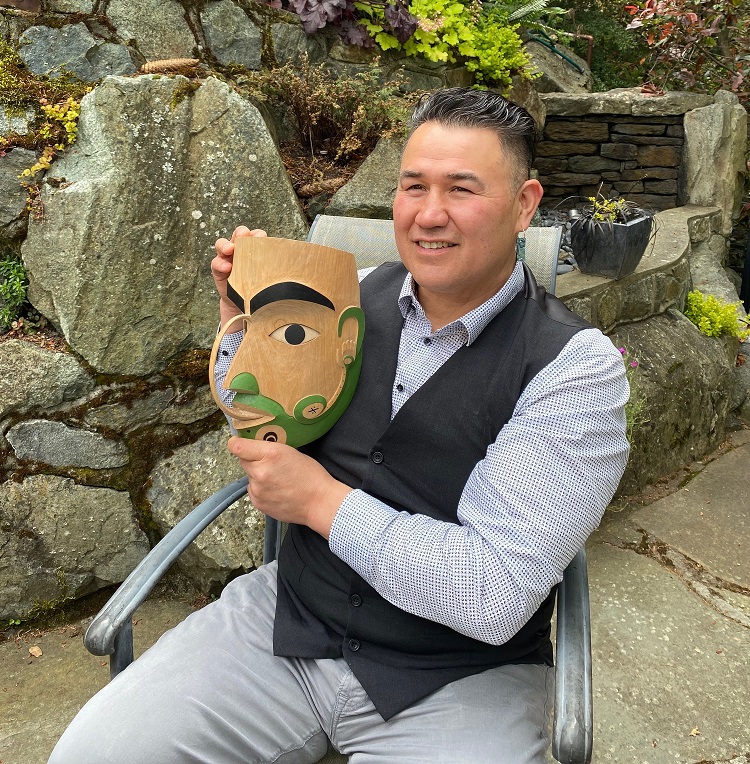 Details: Mask with a human face that reveals a frog design when turned upside down. Built with articulating eyes that close/open.

Many communities around the world have a person whose role is a healer. This mask shows a healer too, called Uushtaquu in the Barkley dialect of the Nuu-chah-nulth. Uushtaquu would look to nature and receive knowledge. A lot of times, that knowledge came from Waʕit (frog). The first time Uushtaquu looked to nature, he heard the sound of Waʕit. Waʕit guides you, helps you benefit during times of ailment, challenge, and sickness. Waʕit also tells you what to avoid. Waʕit lives in the watersheds and marshy spaces where a lot of herbs and medicines grow. Because they live there, they know what is good. Nature knows. As humans, we need to be in more contact with nature again, to not be in such a rush, or presume to know everything. Waʕit is passing on knowledge to the healer. So anywhere around the world where there were individuals who were healers, they had that knowledge from nature. In the past, people were more respectful and patient when looking for guidance and answers, rather than looking for instant answers which often had larger consequences for nature.